Miss Pym Disposes | Josephine Tey
13 posts | 12 read | 5 to read
Miss Lucy Pym, a popular English psychologist, is guest lecturer at a physical training college. The year's term is nearly over, and Miss Pym -- inquisitive and observant -- detects a furtiveness in the behavior of one student during a final exam. She prevents the girl from cheating by destroying her crib notes. But Miss Pym's cover-up of one crime precipitates another -- a fatal "accident" that only her psychological theories can prove was really murder. 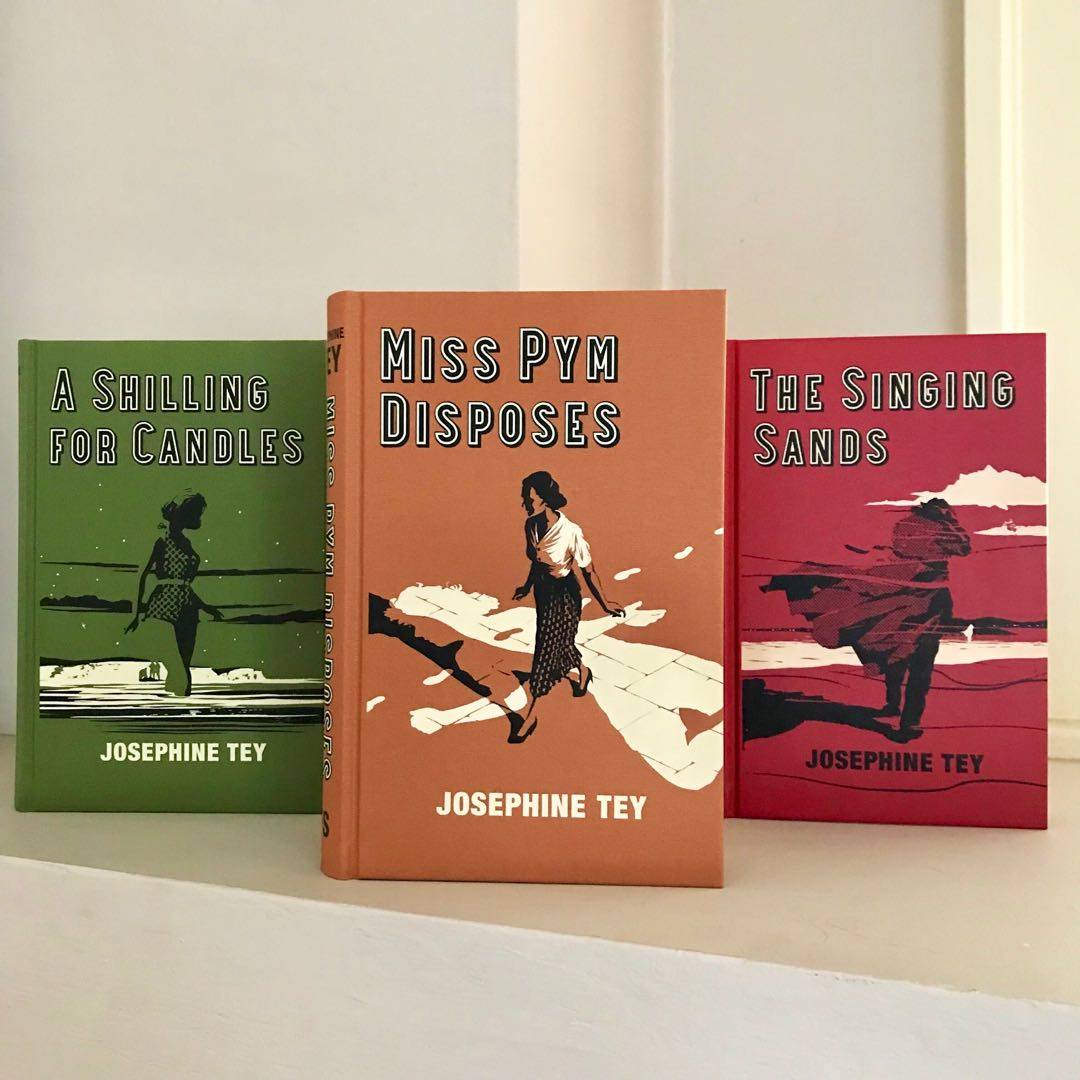 So, the two Tey novels in the back were used finds but I had to suck it up and buy the tagged book new. At least I bought it during the #FolioSociety sale! 😆

Did anyone else take advantage of their latest sale? 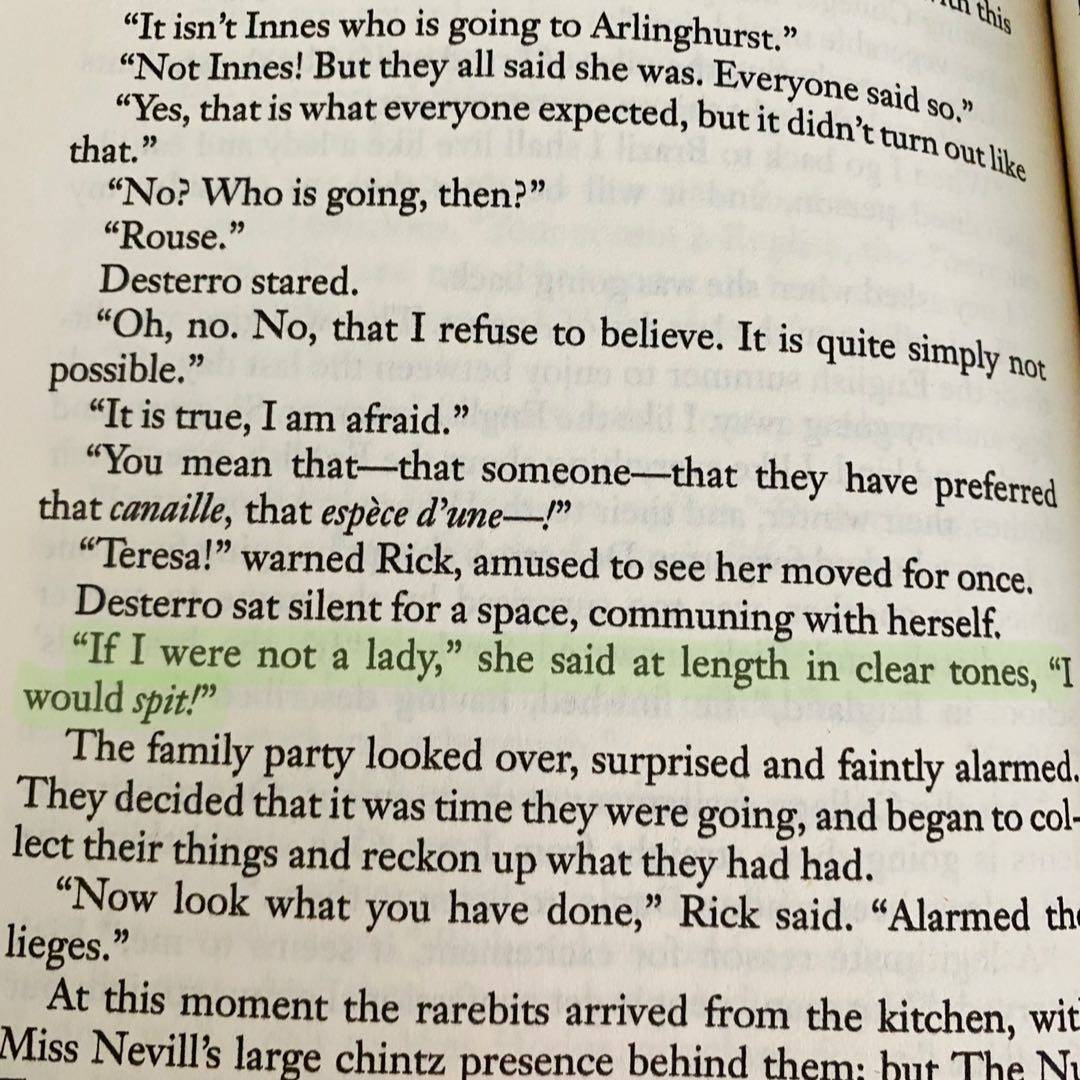 One of my favorite quotes: “If I were not a lady,” she said at length in clear tones, “I would spit!”

She‘s done! I so enjoyed this mystery, which I forgot was a mystery because it just kind of strolls along. Strong sense of place and character. This was my #doublebookspin selection, so I‘m proud! We‘re moving to our permanent home in two days so this book was super cozy to bunk down with amid all the chaos.

LeahBergen I just ordered this one for myself last week. 😊 7mo
EvieBee @LeahBergen I just ordered the Folio edition because it‘s so good! 7mo
Cathythoughts Lovely post 💫 7mo
See All 10 Comments
EvieBee @Cathythoughts Thank you, Cathy! ♥️ 7mo
BookishMarginalia Hope you have a good move! 7mo
batsy Glad you enjoyed and all the best with the move! 7mo
LeahBergen That‘s the one I ordered, too. 😆 7mo
EvieBee @BookishMarginalia @batsy Thank you, Gloria and Batsy! ❤️❤️ 7mo
DivineDiana Hope your move goes smoothly! ❤️ 7mo
EvieBee @DivineDiana Thank you, dearest Diana! 💕 7mo
46 likes10 comments

I love your slow pace and subtlety, but will I finish you in time to complete #bookspinbingo ? No? Maybe?

“…she remembered the day on which the fourth form had discovered her christened name to be Laetitia; a shame that Lucy had spent her life concealing, the fourth form had excelled themselves, and Lucy had been wondering whether her mother would mind very much about her suicide, and deciding that anyhow she had brought it on herself by giving her daughter such a high-falutin name.”

quietjenn I remember liking this one. Hope you enjoy 😀 7mo
batsy I really enjoyed this too, hope you like it! 7mo
EvieBee @quietjenn Thank you! I‘m really enjoying the pacing of it. 💕 7mo
EvieBee @batsy Thank you, Batsy! 💕 (edited) 7mo
CarolynM Love Josephine Tey💖 7mo
37 likes5 comments

My second book by Josephine Tey. I enjoy her writing style. This story is built slowly and steadily around a girls physical training college. For me a ⭐️⭐️⭐️ for plot but a 4 star for writing...and Miss Pym is a lovely character❣️
#classiccrime

A perfect Autumn day here. Breakfast on the verandah with Josephine Tey💕 I so love this time of year! Garden project in the background.. I am putting an olive tree into a big pot. Hope you have a lovely day😊🌺
#australianweather #classicmystery

AlaMich Wow, you have a lot of land! It looks gorgeous! 9mo
Freespirit Hi @AlaMich thank you 😘 we have a beautiful small farm of 100acres where we grow Macadamia and Pecan nuts! 9mo
thegreensofa Did somebody say pecan! 😋💕 9mo
See All 11 Comments
Freespirit Love Pecans💕Charmayne @thegreensofa 9mo
Crazeedi Beautiful!! 9mo
Crazeedi We live on 48 acres, but several families with land around us, so we have lots of privacy and room! What country are you in? 9mo
Freespirit Hi @Crazeedi I live on the east coast of Australia. We have 100 acres on a lovely river and have farmland around us. We grow nuts and have fruit trees, a vegetable garden and chickens. It‘s a heavenly place❣️Do you have crops or cattle on your land? 9mo
Crazeedi @Freespirit we rent out our field to a local farmer friend, he does corn/soybeans. I have apple trees, grapevine, elderberries, strawberries, blueberries, raspberries, asparagus, horseradish, leeks, garlic growing. Also usually 4 big garden plots with vegetables, this year I'm taking a break except for a couple plants. I had overwhelming bounty last year, and I just need to concentrate of fruit this year. Plus all kinds of flowers and perennials! 9mo
Freespirit @Crazeedi Your farm sounds amazing! Gardening is so good for the soul and vegetable gardening is good for the body..❤️ We try to eat something everyday from our back yard! 9mo
Nute Beautiful where you are! 9mo
Freespirit Thanks @Nute we really love it 💕 9mo
54 likes1 stack add11 comments

Reading is taking a back door this week, but I am reading snippets of Miss Pym Disposes between stitches😊 I have come away to a 5 day craft retreat in central NSW. A group or tribe of sewers, stitches, crafters meet every year to work on our projects and talk and eat! It supports this tiny town that used to rely heavily on logging. Last time I was here it was sooo dry.. now it is lush and green..
Happy reading.. or sewing!!
#travel #hobbies

LazyOwl That sounds lovely, enjoy 😁 9mo
CarolynM How lovely! Where are you? Enjoy Miss Pym, she's quite something🙂 9mo
Freespirit Thank you Kristy I will 😊 @LazyOwl 9mo
See All 7 Comments
Freespirit Hi Carolyn Barradine is north of Dubbo, west of Coonabarabran..about 7 hours drive west of Port Macquarie. It has 600 people living here, 2 pubs and a supermarket. We meet at the Showgrounds which has cabins to stay in and a big area where we meet to sew 🧵 @CarolynM 9mo
Rissreads That sounds lovely 😊 9mo
Freespirit Thanks Nerissa 😘 @Rissreads 9mo
CarolynM Fabulous! Enjoy! 9mo
50 likes7 comments

JazzFeathers I've just bought The Man on the Queue by Tey. Can't wait to read it. Loved Nicola Upson's mystery series inspired to her. Need to give a try to Sayers too. 3y
CarolynM Love Miss Pym. I didn't see that ending coming at all! 3y
Moray_Reads Great minds! It helps that I read it so recently 😉 3y
See All 17 Comments
batsy @JazzFeathers Man in the Queue one was a little less impressive for me, but still good! I love Sayers, hope you give her a try :) I'm looking forward to checking out the Nicola Upson series. 3y
batsy @CarolynM I know! I need to read it again soon :) 3y
batsy @Moray_Reads 🙌🏽 3y
emilyhaldi I ❤️ Josephine Tey 3y
JazzFeathers @batsy What titles would you suggest for both authors, then, to someone who never read them? Upson's series is fantastic!!! 3y
Centique I just tried both of these authors for the first time this year. Love em! 3y
Billypar I do like Christie, and I feel like these authors have a comparable - solving murders via knowledge of human nature feel. 3y
writerlibrarian Sayers is so so good. You start with the first one and enjoy Lord Peter

Whose Body?
(edited) 3y
batsy @emilyhaldi @Centique ❤️❤️ 3y
batsy @JazzFeathers For Tey, this book or Brat Farrar are great. The Daughter of Time is a classic but not a traditional whodunit. For Sayers I started with Strong Poison, which is where Harriet Vane is introduced, but other Wimsey books like Murder Must Advertise are great fun! I'm going to take @writerlibrarian's suggestion and read Strong Poison soon so that I read all the Wimsey books order :) 3y
batsy @Billypar Yes, true! Christie tends to do better when she indulges that side of her writing instead of the pure cut and dried puzzle-solving angle. 3y
rubyslippersreads Great vintage covers! 😍 3y
batsy @rubyslippersreads They're cool, aren't they ❤️ 3y
Tonton I had that Gaudy Night edition! Must re-read 3y
94 likes3 stack adds17 comments

I'm judging from this cover that this book is ridiculously awesome. I have to stock the Little Free Library for the university I work at and this was a donation. Maybe I should keep it for myself? #judgedbythecover #marchintoreading #judgedbyitscover

Great book. Very slow build up (but that's not a complaint) and a real twist at the end