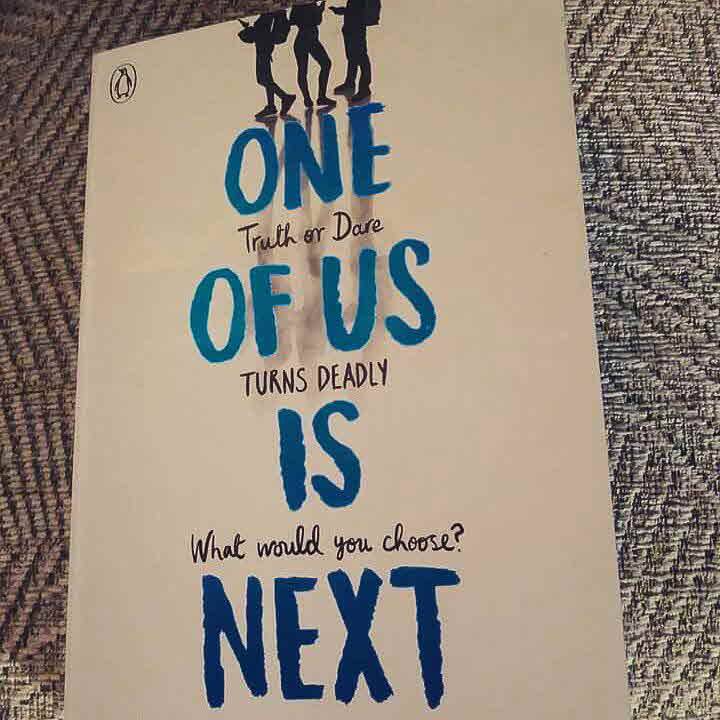 TracyReadsBooks
One of Us Is Next | Karen M. Mcmanus 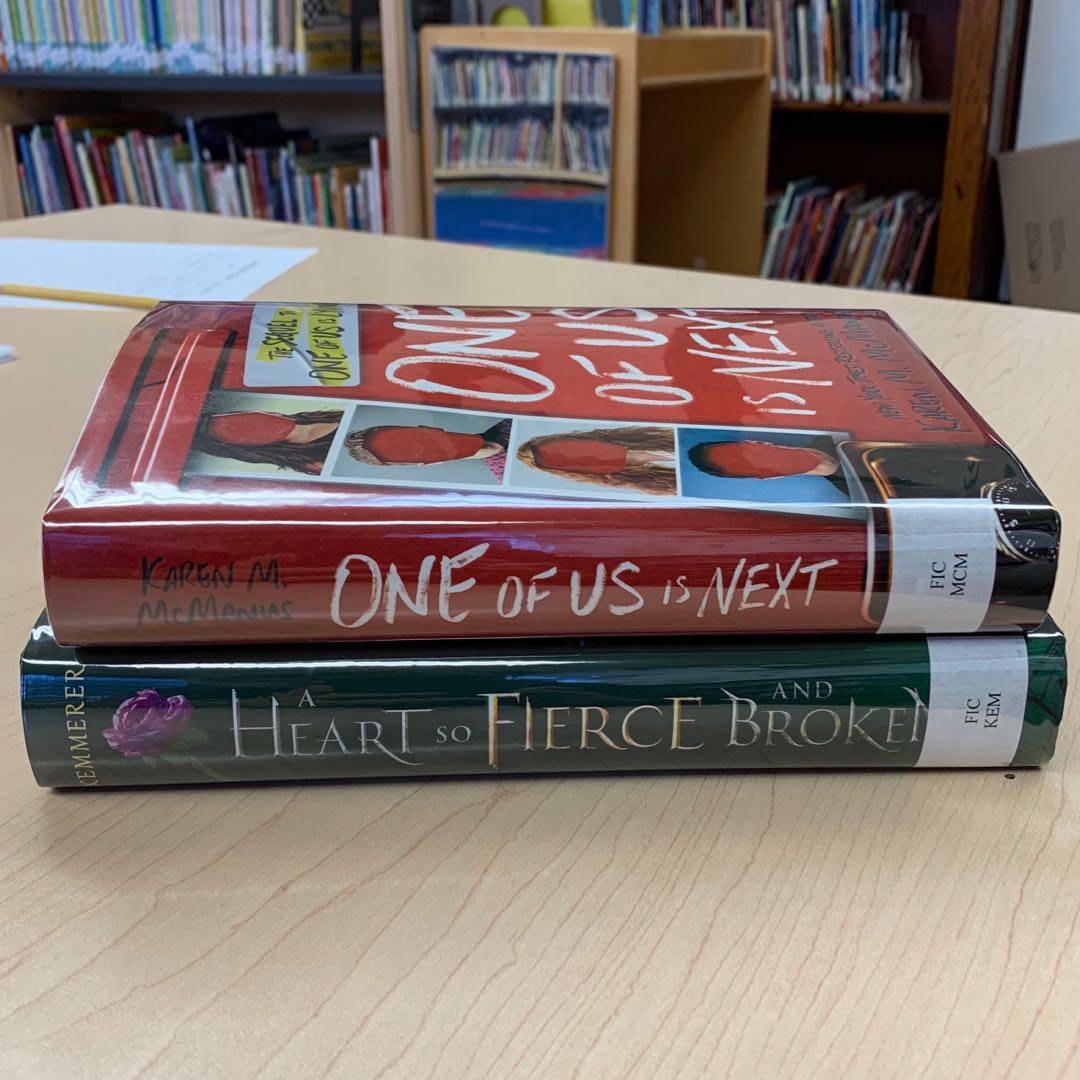 New books in the library!!! Two sequels to two books I very much enjoyed. Looking forward to a long weekend filled with lots of reading.

BookDragonNotWorm
One of Us Is Next | Karen M. Mcmanus

I was worried that this one was going to be a let down. I didn't like it as much as the first, but I found myself satisfied by the end. McManus's writing is almost hypnotic! #happysigh

JoyBlue
One of Us Is Next | Karen M. Mcmanus

maybe 3+: I rated One of Us Is Lying 4 stars. This sequel was still more entertaining than average; but, not as thrilling as the first. Too, there's so much slime. The basic premise is that there's a new round of gossip being dished, by way of a truth or dare game. The original characters still appear (to a lesser degree), with the transition to the new round of main characters being bridged by Bronwyn's little sister, Maeve.

TheLibrarian
One of Us Is Next | Karen M. Mcmanus

B&N #bookhaul today thanks to a holiday gift card. Super excited for the tagged and The God Game. The Robert Jordan book was a present for the hubby.

This year I‘m really trying to curb my book buying so I was pretty impressed to walk into a bookstore unsupervised and didn‘t spend any of my actual money.

WhatWouldJaneDo I got an ARC of The God Game and it was a super fast read for me! Interested to hear what you think. 5d
sammisho My daughter got One of Us is Lying for Christmas. I am waiting for her to finish so I can take it! 5d
72 likes2 comments

kateteaching7and8
One of Us Is Next | Karen M. Mcmanus

This book was amazing! I read it in less than 24 hours, and I can't wait to share it with my friends. Suspense and intrigue are expertly built. I love that Maeve was brought back and also enjoyed the new character additions. I think the idea of a Truth or Dare game gone wrong is not only intriguing, but completely believable (and a little terrifying). I loved that this book wasn't overly predictable, and I can't want to see what McManus does next.

marleed
One of Us Is Next | Karen M. Mcmanus

Often my Mom-hat gets in the way of enjoying YA, but I‘m 3-for-3 thumbs up with this author. It was great to revisit Bayview with Maeve as an MC of this fun mystery. I love the sidebar thoughts of the characters as the mystery unfolds

Now excuse me while I pause and give thanks to the gods of technology that my my method of sustaining HS gossip was this super-cool circle phone.
#ReadTheUSA2020 CA

Bookzombie Love the phone! Is that you in the photos? 2d
marleed @Bookzombie Haha. Yes. As I read this I was reminded how fortunate I was that my Hs years were not documented in social media. That silly phone was my conduit to gossip! 2d
marleed @Bookzombie My son takes every opportunity possible to use that pic. He thinks it‘s hilarious that I actually took my chorded phone to a grassy knoll for a graduation picture! 2d
Bookzombie I love the photos too! 1d
57 likes1 stack add4 comments

Karen M. McManus is an auto buy author and this books didn‘t disappoint at all. I was so excited to return to Bayview. When a game of truth and dare turns deadly everyone is trying to find out who is behind the game. This book kept me on the edge of my seat and of course I didn‘t see the twist coming at the end. Can‘t wait for her next book to come out!

OriginalCyn620 Oh, I can‘t wait to read this one! 6d
marleed I agree. I just read it and will keep up with all her books! 5d
Lovesbooks87 @marleed she has two books coming out this year. She normally only has one! 5d
marleed @Lovesbooks87 Oh that‘s great - can‘t wait! 5d
tracey38 I can't wait to get this one either! 5d
65 likes5 stack adds5 comments

Trying to read this morning but someone wants to cuddle very close to my face this morning! 💜🐱📚💜🐱📚

MissAimz_55
One of Us Is Next | Karen M. Mcmanus

Got to escape for a few hours to my happy place! #barnesandnoble #bookheaven #nerdgirl #teaandabook

vkois88
One of Us Is Next | Karen M. Mcmanus

coral_chanel
One of Us Is Next | Karen M. Mcmanus

One Of Us Is Next 💙
‘Truth or Dare turns deadly
What would you choose?‘ I love love loved One of us is Lying and Two Can Keep a Secret so I‘ve been counting down the days for this beauty to be released

Anyone else get super in to this series? Anyone already finished One of us is Next??
•
•
•
#oneofusisnext #oneofusislying #twocankeepasecret #karenmmcmanus

Moonprismpower I finished this also. My favorite character is Knox. But I didn‘t enjoy the book mainly because it felt unbelievable and underdeveloped plot and characters. What did you think of it? It looks like you gave it a so-so rating? 7d
coral_chanel @Moonprismpower I just finished it today and I was kinda hoping for more dramatics I think? The Truth or Dare didn‘t last as long as I would have hoped and the twist because apparent way sooner than it need to... but overall I enjoyed it, I‘ll definitely be buying more of Karen McManus‘s work when she releases them. Also, yeah I love Knox too, he seemed like the most believable character to me 7d
Moonprismpower Yes! Knox had so much character and I really got to know him. He actually reminds me of someone so that was cool. I liked her other books so she is an author to follow! 7d
3 likes3 comments

First new book Tuesday of the year!!! One of Us is Next is probably the book that I am looking forward to most this year. Going to save it for this weekend so I don‘t have to put it down if I don‘t want too!

robinb Good strategy! 😊👍 1w
dgingo Look at that gorgeous kitty! 😻 1w
tracey38 I didn't know there was another new release and that it was out already! 1w
63 likes1 stack add3 comments

vanslibanan
One of Us Is Next | Karen M. Mcmanus

Bookworm1987 I cant wait to read this. Loved the first book. 1w
MissAimz_55 I have been wanting to read this for a while as I too loved the first book but I keep putting it off! I need to make this one of my next books! 1w
Lovesbooks87 Can‘t wait for this to show up in my mailbox today! 1w
suzie.reads I am waiting for this from the local library. Can't wait! 1w
magyklyXdelish In the final chapter of the first one. This one will be next soon!! 4d
67 likes6 stack adds5 comments

Moonprismpower
One of Us Is Next | Karen M. Mcmanus

Knox was my favorite character.
The ending was not believable.😕
The ending didn‘t feel complete.
But if anything, read it for Knox, the underdog of the novel. 🙂

Missusb
One of Us Is Next | Karen M. Mcmanus

Note to self: careful what you wish for when you say to reader partner ‘got any books for me to read?‘ Here is my #tbrpile ARCs from November right through to March. Lucky school ends in three weeks! No idea where to start. #previewbooks2020 love writing 2020. #newdecade

Cannot wait to read this, loved One Of Us Is Lying.

Nute Oh, I didn‘t know that the book One of Us is Lying has a sequel. Too many books to keep up with! That‘s a good thing, right? 3mo
24 likes1 comment

Schlinkles
One of Us Is Next | Karen M. Mcmanus
This post contains spoilers
show me

I enjoyed One of Us is Lying well enough, but didn't necessarily see the need for a sequel to it. Having read this though, I think I enjoyed it better. I found the characters to be much more sympathetic than in the first installment and the plot was much less far-fetched. The text game of Truth or Dare was more believable than Simon's set-up in the first book. Definitely didn't see the twist coming in the last couple of pages.