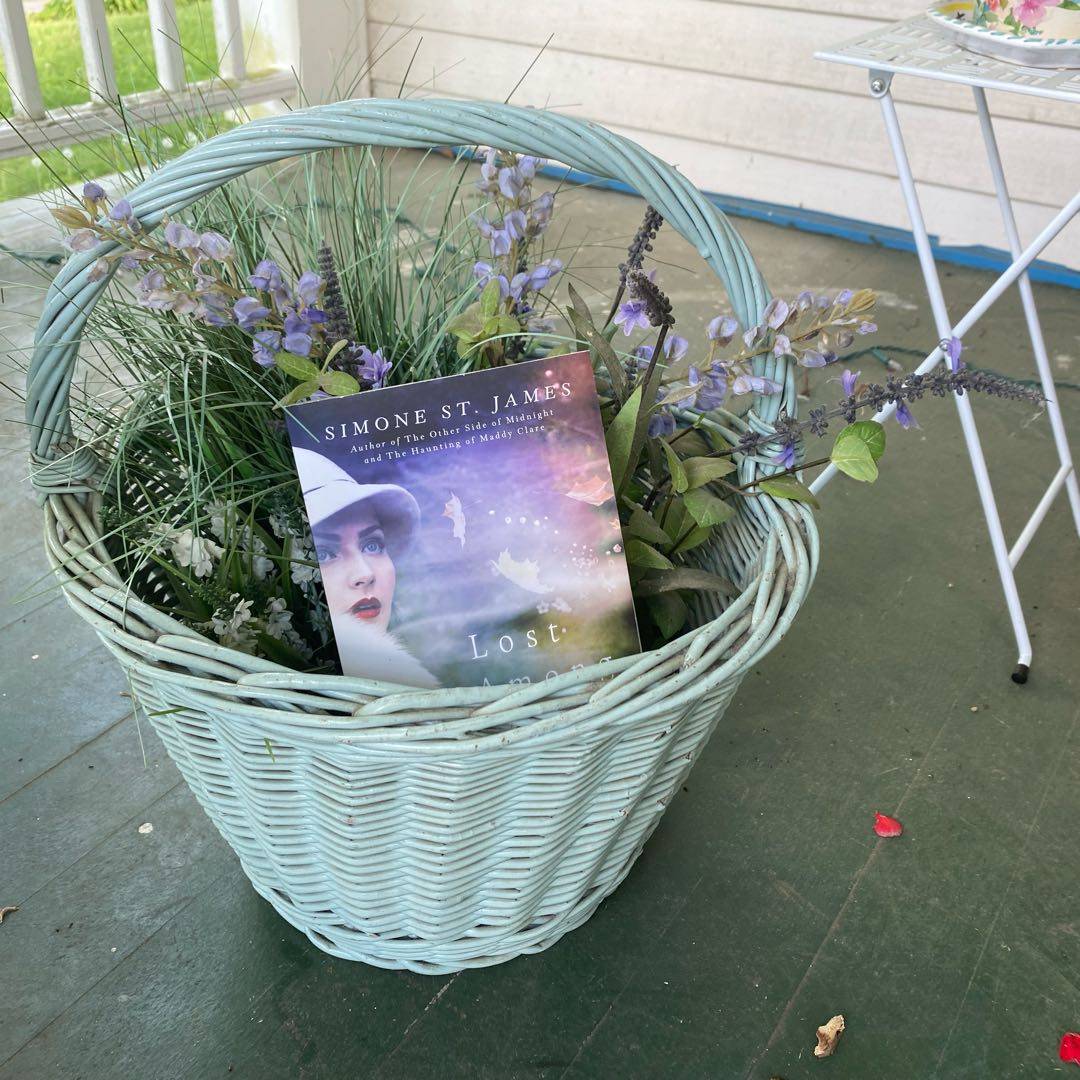 #sundaybuddyread #SimoneStJames #ghosts #supernatural #historicalfiction
I had to finish this today! The ending was just as surprising to me as I expected it would be. No review because I do not want to say anything to spoil our discussion next Sunday. 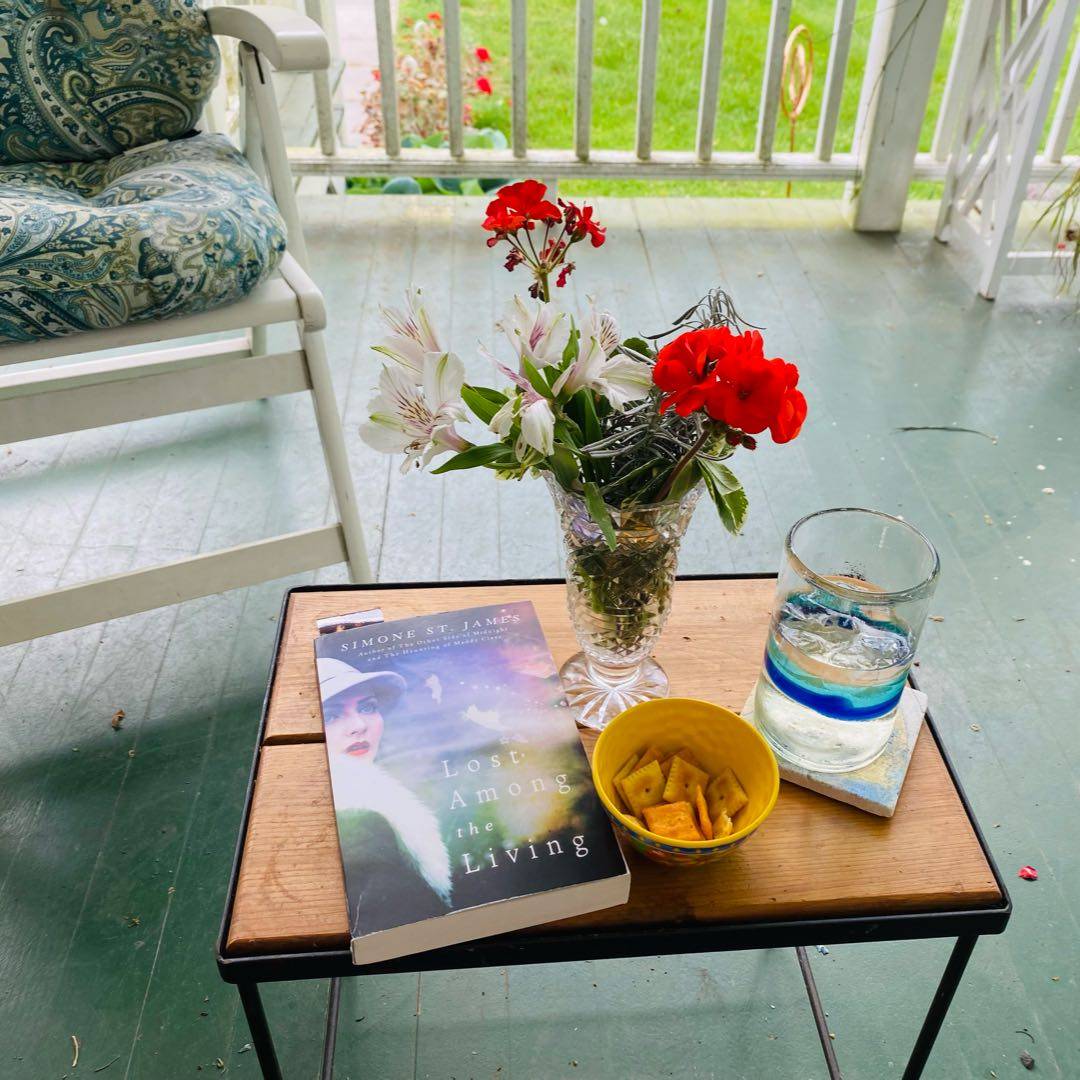 #porchlife #afternoonsnack #sundaybuddyread #SimoneStJames
I am excited to be finishing this up after today‘s discussion.

1977, Claire Lake, Oregon, The Lady Killer Murders: Two men were murdered. 23 year old Beth Greer was the suspect known at The Lady Killer but she was acquitted.
Oregon, 2017. Shea Collins is a receptionist but she runs a true crime website, the Book of Cold Cases. She was almost abducted as a child. She meets Beth Greer and Shea asks her for an interview.

Andrew65, TheAromaofBooks
EadieB They meet at Beth's mansion and items move when she's not looking, and she could swear she's seen a girl outside the window. Shea senses something isn't right. Is she making friends with a manipulative murderer, or are there other dangers lurking in the darkness of the Greer house? This book is full of creepy paranormal activity. 6mo
EadieB It has great character development and is very hard to put down. It is suspenseful with interesting plot twists that keep the pages turning until the very end. The story is told with Shea and Beth's POV in different timelines. I always look forward to the next Simone St. James release as I know it will be a creepy ghost story with mystery and this one did not disappoint. 6mo
TheAromaofBooks Woohoo!! I got this one through BOTM but haven't read it yet. 6mo
EadieB @TheAromaofBooks That‘s great! I hope you enjoy it! 6mo
60 likes5 stack adds4 comments

Current read on this quiet, rainy Friday! I love Simone St. James‘ style, and could hardly pass this up when I saw it! #thebookofcoldcases #simonestjames

Something hasn‘t been right at the roadside Sun Down Motel for a very long time, and Carly Kirk is about to find out why. In 1982 Carly's aunt Viv Delaney moved to New York City and got a job as the night clerk at the Sun Down Motel in Fell, New York. It's 2017 & Carly wants to find out what happened to Aunt Viv as she mysteriously disappeared from the Sun Down before Carly was born.

Andrew65, TheAromaofBooks
EadieB Carly moves to Fell, New York and visits the motel. She soon finds herself involved with the same mysteries that claimed her aunt. This is a creepy ghost story and mystery full of secrets. It is a dark and twisted story with an ending I didn't see coming. The story switches back and forth between 1982 and 2017 with two points of view. 10mo
EadieB Simone St. James is an excellent writer and kept the pages turning. If you enjoy the supernatural, then you will enjoy this book. 10mo
TheAromaofBooks Yay!! 10mo
See All 9 Comments
TheDaysGoBy I loved this one! Glad you enjoyed it too! 10mo
Andrew65 Loved this book! 👏👏👏 10mo
EadieB @Andrew65 I love all her books! @TheDaysGoBy (edited) 10mo
Andrew65 @EadieB Unfortunately not easy to get her books here, needs some searching around. 10mo
EadieB @Andrew65 That's unfortunate! I think she has a new one coming out March 2022.

EadieB
The Other Side of Midnight | Simone St. James

London, 1925. Gloria Sutter helped the bereaved contact loved ones killed during the Great War. Now she's been murdered. Ellie Winter must delve into Gloria's secrets to help her former friend. James Hawley, a damaged war veteran who has dedicated himself to debunking psychics helps Ellie uncover what happened to Gloria. Ellie is tormented by nightmarish visions that herald the grisly murders of those in Gloria's circle.

TheAromaofBooks
EadieB James turns dangerously intimate and an insidious evil force begins to undermine their quest for clues. This is a very atmospheric book from the 1920's with captivating characters. It is full of psychics, seances, ghosts and romance between Ellie and James. If you like gothic romance and paranormal historical fiction, you will love this book! #TheOtherSideofMidnight #SimoneStJames #BookSpinBingo #August2021 14mo
tdrosebud Sounds very intriguing! 14mo
EadieB @tdrosebud Yes! Her books are very good! 14mo
TheAromaofBooks Woohoo!! 14mo
49 likes2 stack adds4 comments

Started this morning and about halfway through after being in a month-long reading slump. This isn‘t a genre I normally read, but I am sucked in. #thesundownmotel #simonestjames #bookslump #horror #paranormal #sunday

Creepy and thrilling! Perfect read for fall. Well written suspense that you will not want to put down. The author weaves together character points of view and timelines seamlessly offering a satisfying ending to this immersive tale. Highly recommend- don't miss this one! #penguinrandomhouse #thebrokengirls #simonestjames