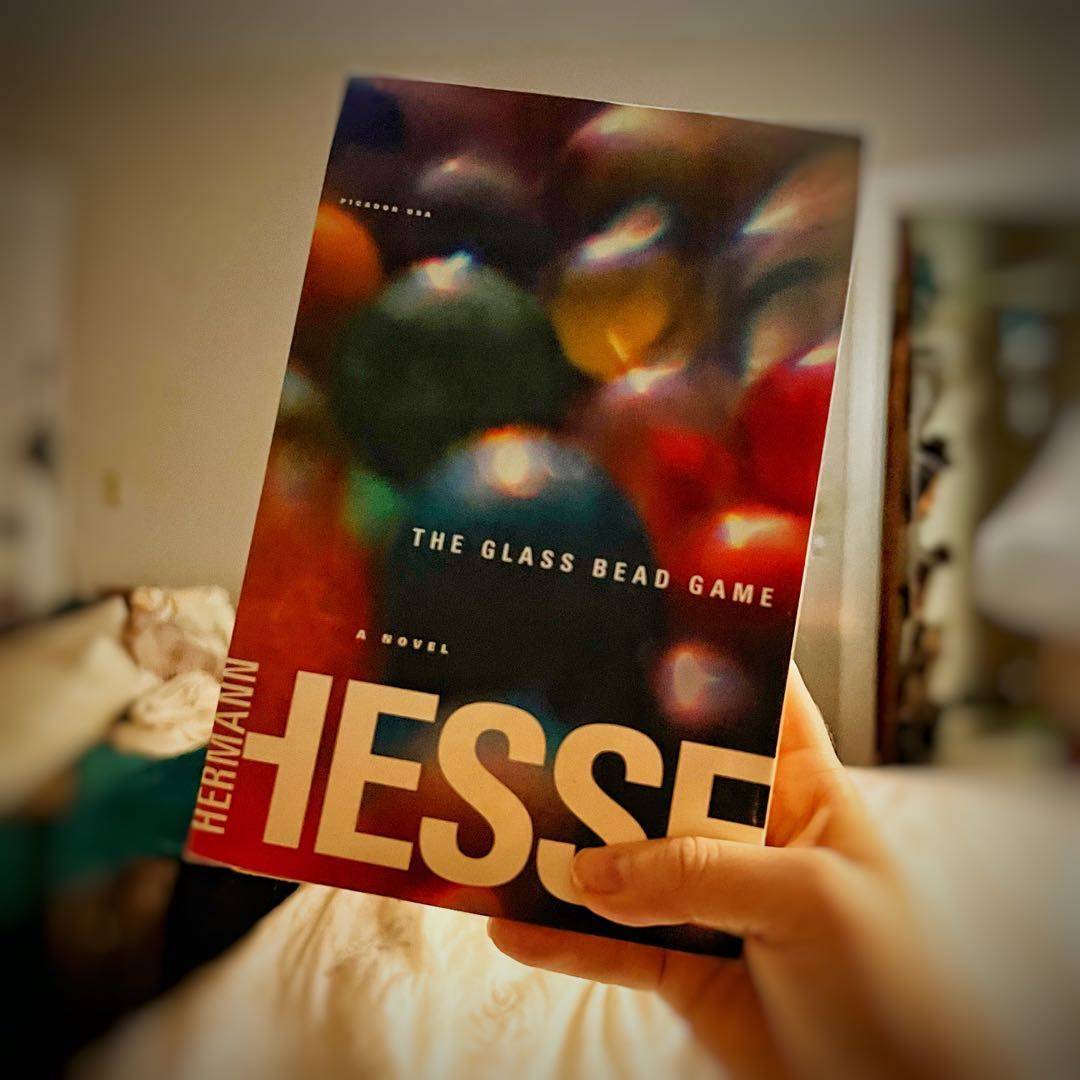 Hesse is one of those authors I‘ve been lucky to read at just the right moments and so several of his works, including this one, have had a great impact on me. #GamesPuzzlesDay #NovemberNarrative @Eggs @Alwaysbeenaloverofbooks

JamieArc I‘ve only read one of his books-Narcissus and Goldmund, but it was the absolute perfect book to be reading at the time. 3mo
IndoorDame @JamieArc I just love it when that happens! 3mo
Eggs Beautiful ❤️ 🤩 ❤️ 2mo
57 likes3 comments 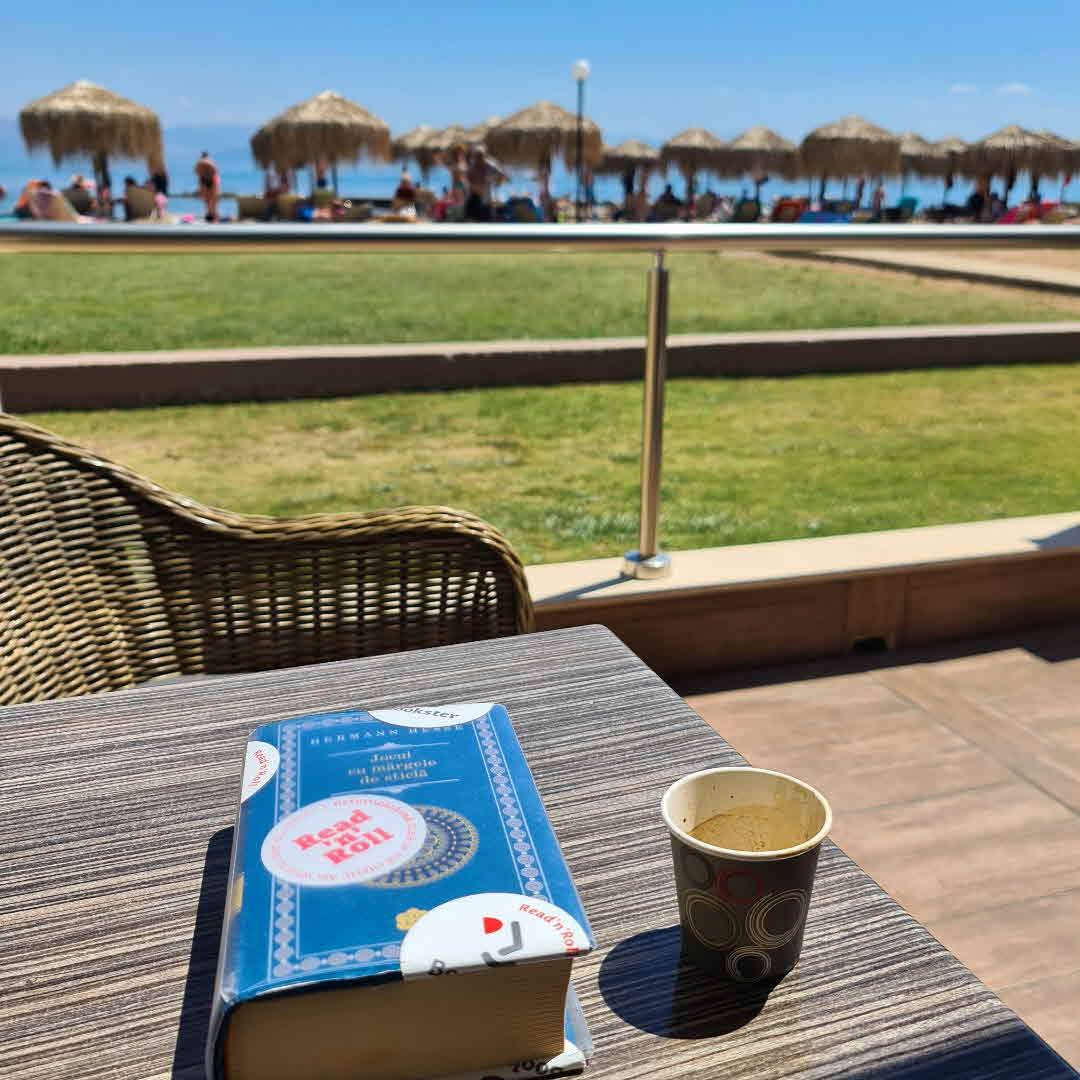 "a proper Glass Bead Game player ought to be drenched in cheerfulness as a ripe fruit is drenched in its sweet juices. He ought above all to possess the cheerful serenity of music, for after all music is nothing but an act of courage, a serene, smiling, striding forward and dancing through the terrors and flames of the world, the festive offering of a sacrifice."

For a moment I regretted using The Glass Books of the Dream Eaters for the Dream prompt at the beginning of the month, but then I remembered this pseudo-scifi chunkster.

This audiobook has taken me most of the month, and I finished a good portion of it today, including on my afternoon walk. I didn‘t mind listening to it, but I can‘t really say I enjoyed it either. It‘s written to take place in the future, but it felt much more like the past to me. Parts of it were interesting to consider but parts of it were also slow, and I didn‘t appreciate the addition of the “writings” at the end.

‘If music is not serene, the people grumble and life is deranged. All this arises from mistaking the nature of music and seeking only tempestuous tonal effects.‘

This was a mixed book for me I loved the story all the way up until the end of the legend section and then seemingly at random we have The Lives section stuck onto the end. This comprises 3 stories written by Knecht which basically retell the book in a more fictional way. For me up until this point the book was 5⭐️after 3⭐️

Cannot get my cover photo to show 😡😡

Genius. My favorite book ever. In truth it is the sum of different books in one.
It is also a manual about leadership. Masterpiece!

Magister Ludi takes place at an unspecified date centuries into the future in a fictional province of central Europe called Castalia, which was reserved by political decision for the life of the mind; technology and economic life are kept to a strict minimum.

This book debuted on my TBR in 2008 on my spouse's recommendation. It still sounds awesome, but for some reason, I've not managed to pick it up yet.

I've been seeing the #GratefulReads posts but it only registered this morning that they were part of a challenge. Sometimes it takes me a while, but I'm jumping in now on Day 18!

OriginalCyn620 Glad to have you aboard! 3y
Alwaysbeenaloverofbooks Happy to have you 😍 3y
Billypar It's good! I liked Steppenwolf slightly more, but it's an interesting world Hesse creates around this game. 3y
37 likes3 comments

In my teens and then twenties I took #inspiration from each of these books, respectively, maybe it‘s time for another Hesse. #selfimprovementsept @OriginalCyn620 @Alwaysbeenaloverofbooks

gradcat Hermann Hesse! Great authors today, and some I don‘t often think of unless prompted like this—thank you! ♥️ 4y
madamereadsalot1 @gradcat this is one of my TBR books! I've read portions of Siddhartha for a literature class years ago, found it interesting, but never went back to complete it. Otherwise, I'm not intimately aquatinted with his work. 4y
gradcat Same with me...I read “Siddhartha & Steppenwolf, plus some shorter pieces, all the way back in high school! And do you know, in all of my lit classes in higher ed, no one ever read/spoke of Hesse again...I wonder if his work just somehow fell out of style.... 4y
22 likes1 stack add3 comments

#LiteraryLuck #Games A Hesse I have not read also published under the name Magister Ludi .

vkois88, Alwaysbeenaloverofbooks
Alwaysbeenaloverofbooks Pretty cover 💚💚 4y
Leftcoastzen @Alwaysbeenaloverofbooks I will be on the lookout for it , added image from the internet.😀 4y
Billypar I really enjoyed it: very well crafted and imaginative. Though of the two Hesse's I've read I think I slightly prefer Steppenwolf. I need to pick up Siddhartha one of these days- still on my shelf unread. 4y
See All 8 Comments
saresmoore I just went through James Mustich‘s 1,000 Books list & noticed this is on it. I look forward to reading it, especially after @Billypar ‘s endorsement.

1,000 Books to Read Before You Die
4y
vkois88 I love the cover. It's beautiful 4y
RealBooks4ever This one's been on my list forever! Must get a copy! 💜 4y
Liz_M @saresmoore it's also on the "1001 books to read before you die" list ? 4y
Leftcoastzen @Billypar It‘s definitely on the list to get to :I‘ve read Steppenwolf and Siddhartha .He‘s a great writer. 4y
47 likes8 comments

Diabolo (singular) Diabolus (plural). Had to look up the definition. Nice little word. Very apposite in this context.

This is an example of a book I bought just for its cover. My endless TBR plays with my heart. Maybe this will be the year I read it.

If this happened to anyone other than me, I wouldn't believe it. Back in 1998, while living in upstate NY, I acted in a play called Tracers, which was about the Vietnam War. There were many references in the play to Hermann Hesse, whose work I wasn't familiar with back then, so I went to a used bookstore nearby to see if they had any of his books. I bought it, and inside of it, someone had left this full-page ad for a protest against the war!

Nebklvr What a cool find!! 5y
keithmalek @MrBook this might be a good question for you to post on Litsy: What was the most interesting thing you've ever found left inside of a book? 5y
MrBook WOW! 😳👏🏻👏🏻👏🏻 That's incredible! Absolutely, a phenomenal question. Thank you for sharing 👍🏻👍🏻! 5y
23 likes3 comments

For in prehistoric times music, like the dance and every other artistic endeavor, was a branch of magic, one of the old and legitimate instruments of wonder-working.

I am finally tackling this one. It's been on my TBR since my teenage years. Planning on reading 50 pages per day & really absorbing it.

RealBooks4ever On my tbr for ev er! 💜 I like the cover on this one! 6y
48 likes2 stack adds1 comment

Visiting family for two weeks; do you think I have brought enough books with me? In need I have the books I already have here, the e reader and Audible but you cannot be to careful

Vexingcircumstance I have a stack bigger than that that I have whittle down for a four night trip. Lol 6y
CocoReads That's about the size I take for 2 nights. 6y
Gayan You can never take enough books. 6y
See All 8 Comments
Lacythebookworm This is one reason I love Litsy so much! We all take way too many books with us in addition to having e- and audio -books! ❤️❤️❤️🙌 6y
ErickaS_Flyleafunfurled You never know what you might be in the mood for. It's best to be prepared! 6y
Faibka Nice! I carry a small stack with me at all times, best to be always prepared! 😊📚 6y
ReadingEnvy it isn't just number but what mood you'll be in. I always bring long books and wish I had lighter fare while at my family. 6y
bitterbear @ErickaS_Flyleafunfurled Truth!!! 6y
65 likes8 comments

Bookgirl Mine too! It was on some best off list. I'd never even heard of it before then. 6y
Bookgirl Best OF 6y
25 likes1 stack add2 comments

I've read it too many times to count.

I'm about to take my book club book international!