Hench | Natalie Zina Walschots
14 posts | 18 read | 1 reading | 9 to read
A smart, imaginative, and evocative novel of love, betrayal, revenge, and redemption, told with razor-sharp wit and affection, in which a young woman discovers the greatest superpower--for good or ill--is a properly executed spreadsheet. Anna does boring things for terrible people because even criminals need office help and she needs a job. Working for a monster lurking beneath the surface of the world isn't glamorous. But is it really worse than working for an oil conglomerate or an insurance company? In this economy? As a temp, she's just a cog in the machine. But when she finally gets a promising assignment, everything goes very wrong, and an encounter with the so-called "hero" leaves her badly injured. And, to her horror, compared to the other bodies strewn about, she's the lucky one. So, of course, then she gets laid off. With no money and no mobility, with only her anger and internet research acumen, she discovers her suffering at the hands of a hero is far from unique. When people start listening to the story that her data tells, she realizes she might not be as powerless as she thinks. Because the key to everything is data: knowing how to collate it, how to manipulate it, and how to weaponize it. By tallying up the human cost these caped forces of nature wreak upon the world, she discovers that the line between good and evil is mostly marketing. And with social media and viral videos, she can control that appearance. It's not too long before she's employed once more, this time by one of the worst villains on earth. As she becomes an increasingly valuable lieutenant, she might just save the world. A sharp, witty, modern debut, Hench explores the individual cost of justice through a fascinating mix of Millennial office politics, heroism measured through data science, body horror, and a profound misunderstanding of quantum mechanics. 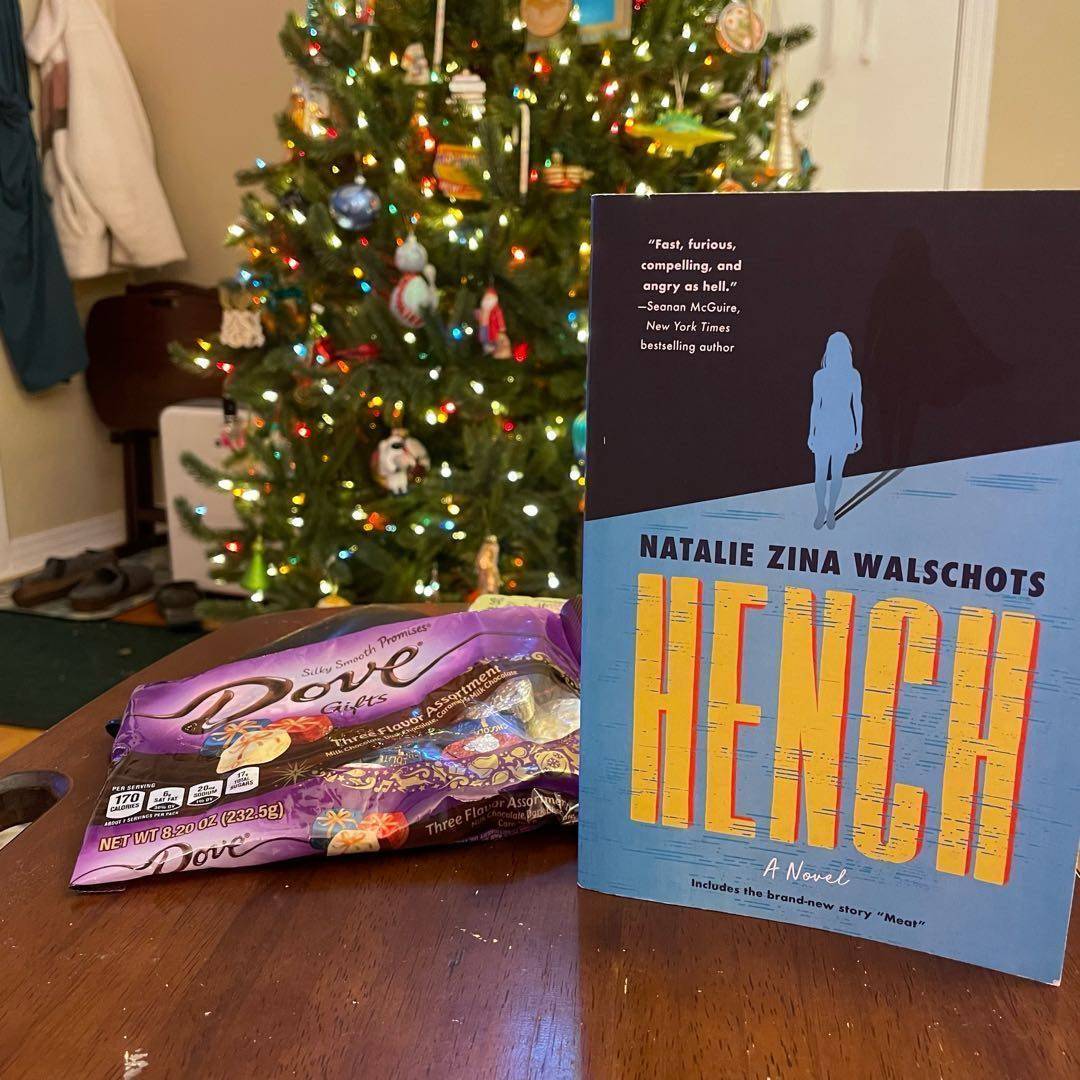 Thank you very much, Melanie, for the book and candy! I'm looking forward to starting it tonight! And the candy is delicious! Happy Jolabokaflod! 📚🎄❄️ Merry Christmas!!

Oh my goodness!!! Edited to add this is Paul Sun-Hyung Lee (Appa from Kim‘s Conveniwnce)

An unusual exploration of superheroes and villains that I thought bears some correlation to modern policing in this world. The book is gritty and snarky and I liked the imperfectness of the characters. I recommend the audio, the narrator is excellent. Spreadsheet nerds will also appreciate this book because the real hero analyizes data and numbers.

One hench, injured by a superhero, decides to use her data analysis knowledge to change the world. By way of villainy.

This was not what I expected, but I enjoyed it. This was a fascinating story that managed to make me care about how the story ended without making me root for any of the characters.

And an examination of the collateral damage of super powered battles. Popular media doesn‘t usually address those types of consequences. 🌕🌕🌕🌗🌑

I enjoyed this book so much. I suspect if I were to ever become a supervillain, I would be very similar to The Auditor.

A beautiful exploration of the grey areas of morality.

Such a unique book that kept me intrigued throughout its entirety! I love the focus on superheroes not being the best or most admirable people in the world. I loved reading a book that showed the "humanity" of villains. The book does a great job of showing that people are much more complex than just good or bad. The imagery is incredible. Their is a great diversity of characters. I would love to see this become a movie or show!

I think I‘m going to be in the minority with this one by bailing. I don‘t think there‘s anything wrong with the book per se, it just comes across as being a little too over the top for my tastes.

ShelleyBooksie The story sounds so good but the first page did not draw me in. 11mo
56 likes1 stack add1 comment

Finally picking up the last of the Canada Reads 2021 shortlist, which I will hopefully be done in time for the debates next week! I‘ve enjoyed the other 4 picks, but this is the one I think I‘m the most excited about.

This was such a fun and fantastic read! The concept of a book from the point of view of a henchman to a villain was delightful. It has quirky writing, relatable characters, and is full of action.

The concept of the damage caused by superheroes was really interesting and definitely raises some ethical questions. I also couldn‘t predict fully where this story was going, which was great.

I really love the premise & the LGBTQA rep - a bi MC! two characters who use they/them! a trans character who is never deadnamed! - and the author is really engaging in interview.

But for me, the book didn‘t quite stick the landing. I enjoyed it, but I don‘t whole-heartedly recommend it the way I‘d hoped.

akaGingerK The miss is similar to how I feel about several Marvel films - there‘s a high-concept conflict set up at the start, but the climatic final battle is very personal, so the higher concept conflict goes unaddressed. In this case, it‘s Anna‘s embrace of villainy. Do her ends justify the means in her mind? Since she‘s continuing to act at a remove, and since her emotional state is opaque to herself at the end, I‘m not entirely sure if she‘s all in. 2y
2 likes1 comment