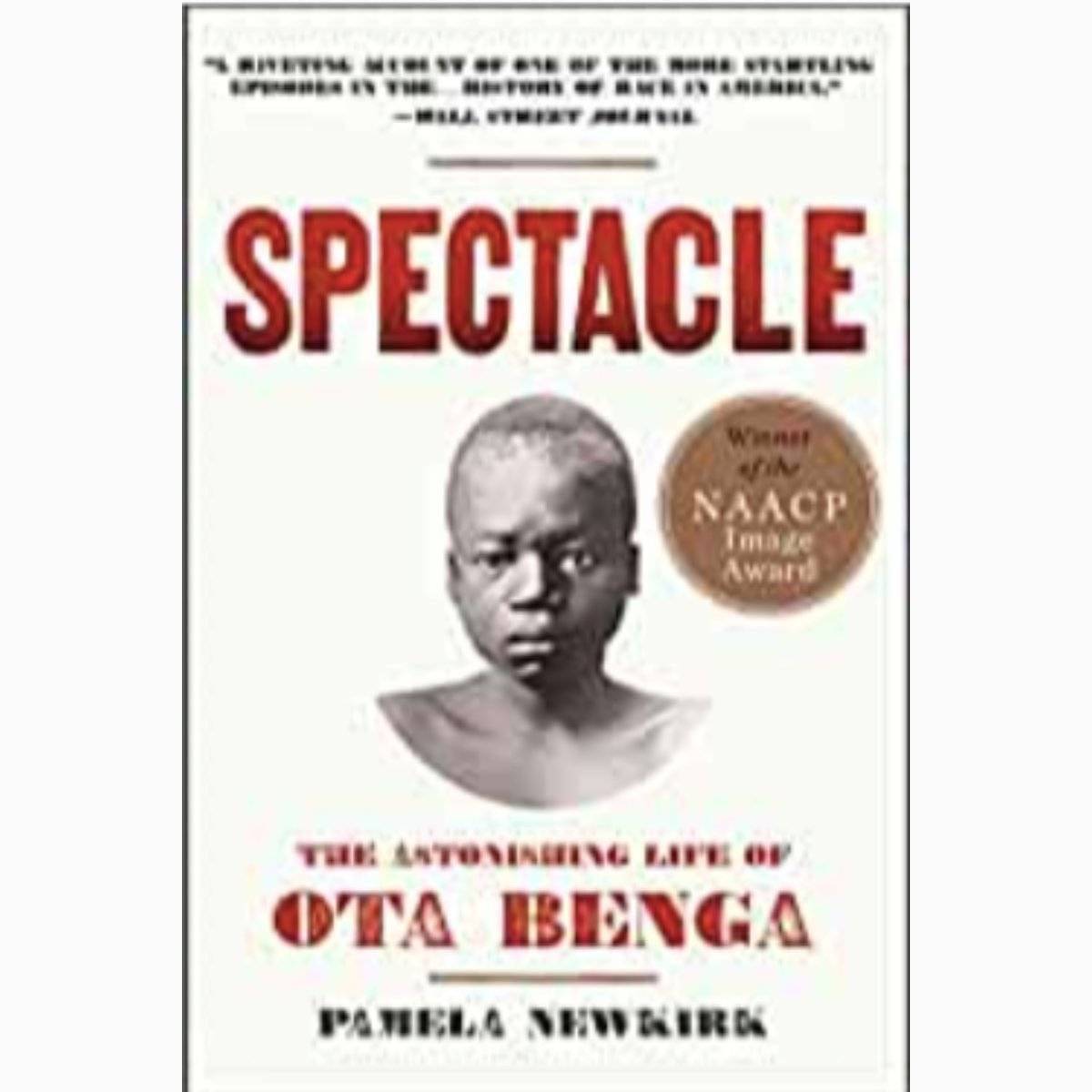 Gutwrenching bio with multiple themes of colonization, Christian evangelism, eugenics, and racism. It tells the story of Ota Benga, a Mbuti (“pygmy“) Congoloese man who was kidnapped by an American thinly veiled as a missionary, brought to the US for show at the 1904 St. Louis World's fair, exhibited with monkeys at the Bronx Zoo for white people's amusement, then released with Black support.

Riveted_Reader_Melissa, Librarybelle, BarbaraBB
Singout I appreciated how it wasn't just limited to what happened in the U.S., but looked at how the politics of the Belgian colonization of King Leopold and its context win wider Europe, the American history of enslavement, the longer history of Congolese peoples, and the structures and practices of Christian evangelism all intersected as parts of white supremacy.
2w
BarbaraBB Incredibly sad, all these white groups, and what it led to… 1w
Librarybelle Great review! 1w
14 likes1 stack add3 comments 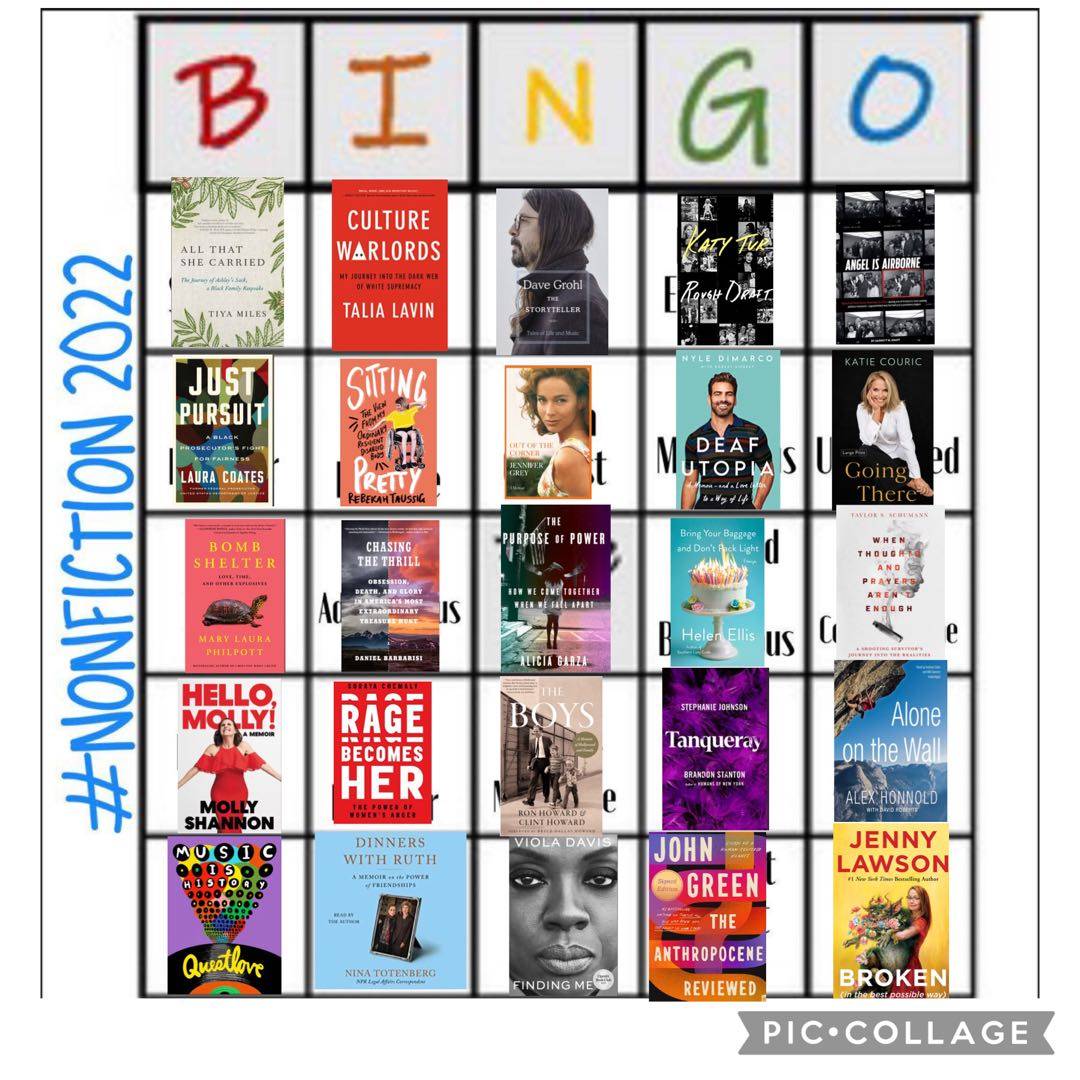 I did it! I finished my #Nonfiction2022 Bingo card. The last one I read for the card was Alone on the Wall, about mountain climber Alex Honnold. I enjoyed a lot of these, and it is hard to pick favorites. I think I‘d rank The Storyteller by Dave Grohl, Going There by Katie Couric, and Bomb Shelter by Mary Laura Philpott among my top reads.

It‘s appropriate that I finished this in #NonfictionNovember

An unflinching account of the California Camp Fire, which suddenly sparked and spread without warning, killing 85 and destroying the town of Paradise. It follows several people as they try to escape—the minute-by-minute accounts make you feel like you are fleeing with them. The book also examines the climate conditions and political decisions that contributed to the disaster.

Prompt: I‘m Out of Left Field
And that‘s a wrap for #Nonfiction2022

Riveted_Reader_Melissa
Suet624 Just be a tough read. 3w
Amiable @Suet624 It definitely is —you can practically feel the heat and smell the smoke as you are reading about the slow crawl down the mountain through the flames. 3w
Singout Way to go! I haven‘t even done one bingo line yet! 3w
Amiable @Singout It probably helps that I had a very elastic definition for some of these categories. LOL 3w
57 likes1 stack add4 comments

This book reminded me of my fav quote by our late president Abdul Kalam sir, “if you want to shine like a sun, first burn like a sun”. It is brutally honest memoir. It tells the story of actual suffering & burning behind the glittering life of the Actress. motivating & inspiring. Of course, I enjoyed the #audio #memoir 4.5⭐️
#nonfictionnovember #nonfiction2022 #bookspinbingo #free #nfnovember #nfnov

Blackink_WhitePaper
Return to Love: Reflections on the Principles of "A Course in Miracles" | Marianne Williamson

What a fantastic book ! Much needed positive dose for my disastrous week 😰 a must read book for anyone & everyone. #nonfictionnovember #nonfiction2022 #bookspinbingo

Blackink_WhitePaper
Year of Yes: How to Dance It Out, Stand In the Sun and Be Your Own Person | Shonda Rhimes

I haven‘t seen much of Shonda Rhimes‘ shows still I could enjoy this one. I could totally imagine the struggles of an introvert ! The best part of the book is author giving a speech in the presence of powerful women peers. strong & uplifting. Audio narration was too fast esp during her speeches,otherwise great narration. I can say it as Interesting & inspiring. 4.5⭐️ #nonfictionnovember #nonfiction2022 #bookspinbingo

Here is #bookspinbingo list for #November. I am planning to finish #nonfiction2022 is there any nonfiction November challenges / bingo ?

The bit of investigative journalism that launched Nellie Bly's career. She very easily, too easily, was institutionalized. This was further supported by the number of sane women stuck there. The conditions were horrible. Bly's expose brought these conditions to light and helped start reform.
#nonfiction2022 @Riveted_Reader_Melissa #pantone2022colorchallenge #sudanbrown @Clwojick

A memoir if the first 30 or so years of her life. I loved The Parent Trap as a kid, but I've only seen Pollyanna once nd want to check out her other movies. I enjoyed her stories of behind the scenes and with other well known actors. I hated the financial debacle she had and that she had self esteem issues. Overall a good read for any fan of hers.
#nonfiction2022 @Riveted_Reader_Melissa #pantone2022colorchallenge #chiseledstone @Clwojick

This was really compelling: the second book about an African boy soldier for me this year. This memoir is about a teen who escapes with two friends from his village, and survives for a long time before being forced into the military, then released into a rehab program and eventually escaping to the U.S. Excellent insights into the impact of loss of home and family in civil war.
#ReadingAfrica2022 #SierraLeone
#Bookspin
#Nonfiction2022 #Survivor

Riveted_Reader_Melissa, BarbaraBB, TheAromaofBooks
BarbaraBB I read some about child soldiers too this year. It‘s a hard subject but I learned a lot too. 1mo
TheAromaofBooks Great progress!!! 1mo
TheBookHippie My daughter met several in high school they were so so brave. They taught me so much. 4d
11 likes1 stack add3 comments