Nevertheless, We Persisted: 48 Voices of Defiance, Strength, and Courage | In This Together Media
7 posts | 8 read | 2 to read
A powerful collection of essays from actors, activists, athletes, politicians, musicians, writers, and teens, including Senator Amy Klobuchar, actress Alia Shawkat, actor Maulik Pancholy, poet Azure Antoinette, teen activist Gavin Grimm, and many, many others, each writing about a time in their youth when they were held back because of their race, gender, or sexual identity--but persisted. "Aren't you a terrorist?" "There are no roles for people who look like you." "That's a sin." "No girls allowed." They've heard it all. Actress Alia Shawkat reflects on all the parts she was told she was too "ethnic" to play. Former NFL player Wade Davis recalls his bullying of gay classmates in an attempt to hide his own sexuality. Teen Gavin Grimm shares the story that led to one of the infamous "bathroom bills," and how he's fighting it. Holocaust survivor Fanny Starr tells of her harrowing time in Aushwitz, where she watched her family disappear, one by one. What made them rise up through the hate? What made them overcome the obstacles of their childhood to achieve extraordinary success? How did they break out of society's limited view of who they are and find their way to the beautiful and hard-won lives they live today? With a foreword by Minnesota senator and up-and-coming Democratic party leader Amy Klobuchar, these essays share deeply personal stories of resilience, faith, love, and, yes, persistence. An International Latino Book Award Winner A National Council for Social Studies Selection "Each tale is a soulful testament to the endurance of the human spirit and reminds readers that they are not alone in their search for self. . . . An unflinchingly honest book that should be required reading for every young person in America." --Kirkus Reviews, starred review "An invaluable collection of snapshots of American society." --VOYA, starred review "[A] gem of a book. . . . There's a lot to study here and talk about on the way to becoming kinder, more empathetic, and most important, compassionate." --Booklist "Readers encountering injustice in their own lives may be compelled to take heart--and even action." --Publishers Weekly "A powerful collection of voices." --SLJ "The sheer variation in writing styles, subject-matters, and structure to these narratives provides readers with inspiration in assorted forms and a complex interpretation of what it means to persist." --The Bulletin

DaYoung
Nevertheless, We Persisted: 48 Voices of Defiance, Strength, and Courage | In This Together Media 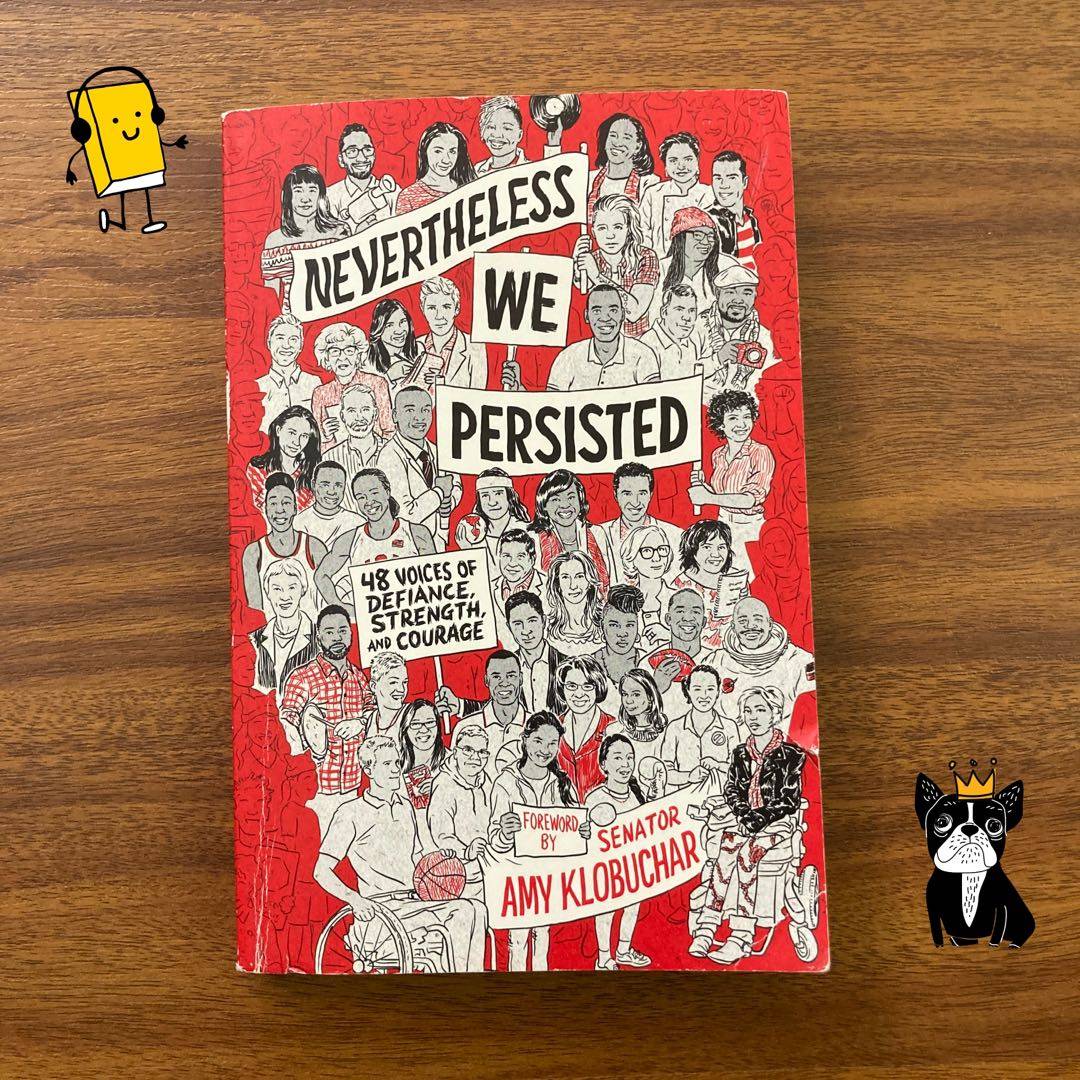 We were given this book for the Ky Writing Program! Looks like a good book :)

ajdennis
Nevertheless, We Persisted: 48 Voices of Defiance, Strength, and Courage | In This Together Media 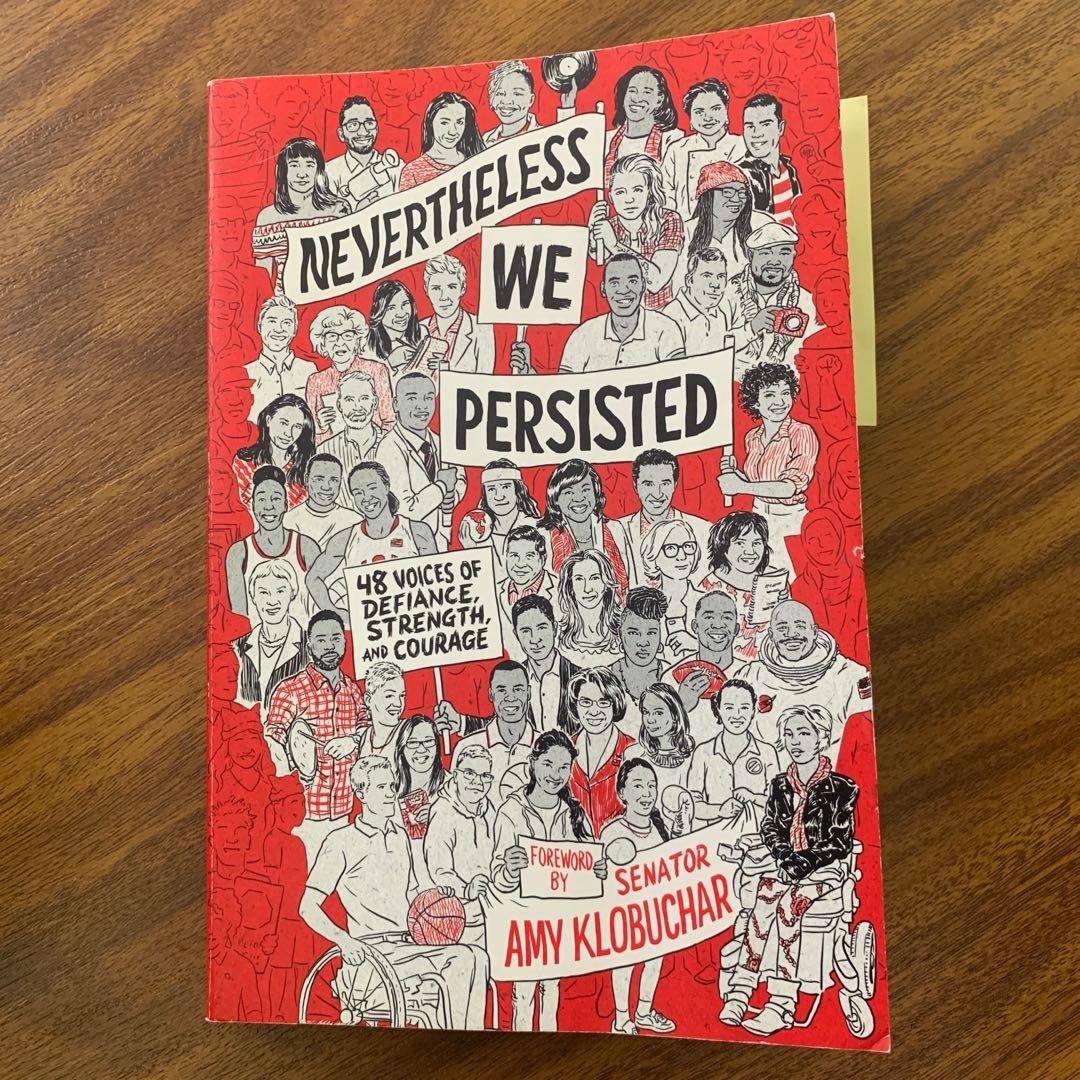 Just got this book. I‘ve only read the forward so far but loving it already!

vlwelser
Nevertheless, We Persisted: 48 Voices of Defiance, Strength, and Courage | In This Together Media

This is an interesting collection of essays by and about people who faced adversity in their lives. Some famous ish and others less so.

MatchlessMarie
Nevertheless, We Persisted: 48 Voices of Defiance, Strength, and Courage | In This Together Media

Today has been a hard day. 🗳

Megabooks It has. I just keep thinking about it. I hope one of those girls she pinky promised grows up to be president. EW would‘ve been great. 3y
Hooked_on_books It really has. I‘d love to see her as veep—she‘d be dynamite and we‘d get one of these damn ceilings broken. 3y
SamAnne Yes so sad. 3y
See All 6 Comments
Ruthiella She had my vote too!😢 3y
Bookwormjillk Yes it has 3y
MatchlessMarie 💙💙💙 @Megabooks @Hooked_on_books @SamAnne @Ruthiella @Bookwormjillk 3y
59 likes6 comments

There‘s so much more light than darkness in the world. And if you don‘t see it, then you can create it.

Whatever you think is most unacceptable or unworthy about yourself is usually the source of your magic.

Whatever you think is most unacceptable or unworthy about yourself is usually the source of your magic.