Anno Dracula 1918: The Bloody Red Baron | Kim Newman
12 posts | 5 read | 3 reading | 8 to read
Praise for"Anno Dracula" "Kim Newman's Anno Dracula is back in print, and we must celebrate. It was the first mash-up of literature, history and vampires, and now, in a world in which vampires are everywhere, it's still the best, and its bite is just as sharp. Compulsory reading, commentary, and mindgame: glorious." -Neil Gaiman "Politics, horror, and romance are woven together in this brilliantly imagined and realized novel. Newman's prose is a delight, his attention to detail is spellbinding." -"Time Out" Stephen King assumes we hate vampires; Anne Rice makes it safe to love them, because they hate themselves. Kim Newman suspects that most of us live with them "Anno Dracula"is the definitive account of that post-modern species, the self-obsessed undead. -"New York Times""" "Anno Dracula"will leave you breathless... one of the most creative novels of the year. -"Seattle Times" Powerful... compelling entertainment... a fiendishly clever banquet of dark treats. -"San Francisco Chronicle"'A ripping yarn, an adventure romp of the best blood, and a satisfying read' -"Washington Post Book World" "The most comprehensive, brilliant, dazzlingly audacious vampire novel to date. 'Ultimate' seems an apt description..."Anno Dracul"a is at once playful, horrific, intelligent, and revelatory." -"Locus" "A marvelous marriage of political satire, melodramatic intrigue, gothic horror, and alternative history. Not to be missed." -"The Independent" "Once you start reading this Victorian-era thriller, you will not besatiated until you reach the end." -"Ain't It Cool" "Anno Dracula is the smart, hip Year Zero of the vampire genre's ongoingrevolution." -Paul McAuley "Kim Newman brings Dracula back home in the granddaddy of all vampire adventures. Anno Dracula couldn't be more fun if Bram Stoker had scripted it for Hammer. It's a beautifully constructed Gothic epic that knocks almost every other vampire novel out for the count." -Christopher Fowler "The most interesting take on the Dracula story... to date. Recommending this one to all those that love Dracula and historical fiction!" -"RexRobotReviews" -- WAR IS HELL... It is 1918 and Graf von Dracula is commander-in-chief of the armies ofGermany and Austria-Hungary. The War of the Great Powers in Europeis also a war between the living and the undead. Caught up in the conflict, Charles Beauregard, an old enemy of Dracula, his protege Edwin Winthrop, and intrepid vampire reporter Kate Reed go head-to-head with the lethalvampire flying machine that is the Bloody Red Baron...In the brand-new novella "Vampire Romance," Genevieve Dieudonne, newly returned to England, infiltrates a singular vampire gathering in theservice of the Diogenes Club. A brand-new edition, with additional novella, of the critically acclaimed, bestselling sequel to Anno Dracula.Written by popular novelist and movie critic Kim Newman, "The Bloody Red Baron" takes the story into the 20thcentury. "

“The conversation of Poe and Dracula. This was to be a moment in the history of imagination.” 🤩 What a line!!! #Scarathlon2022 #TeamMonsterMash 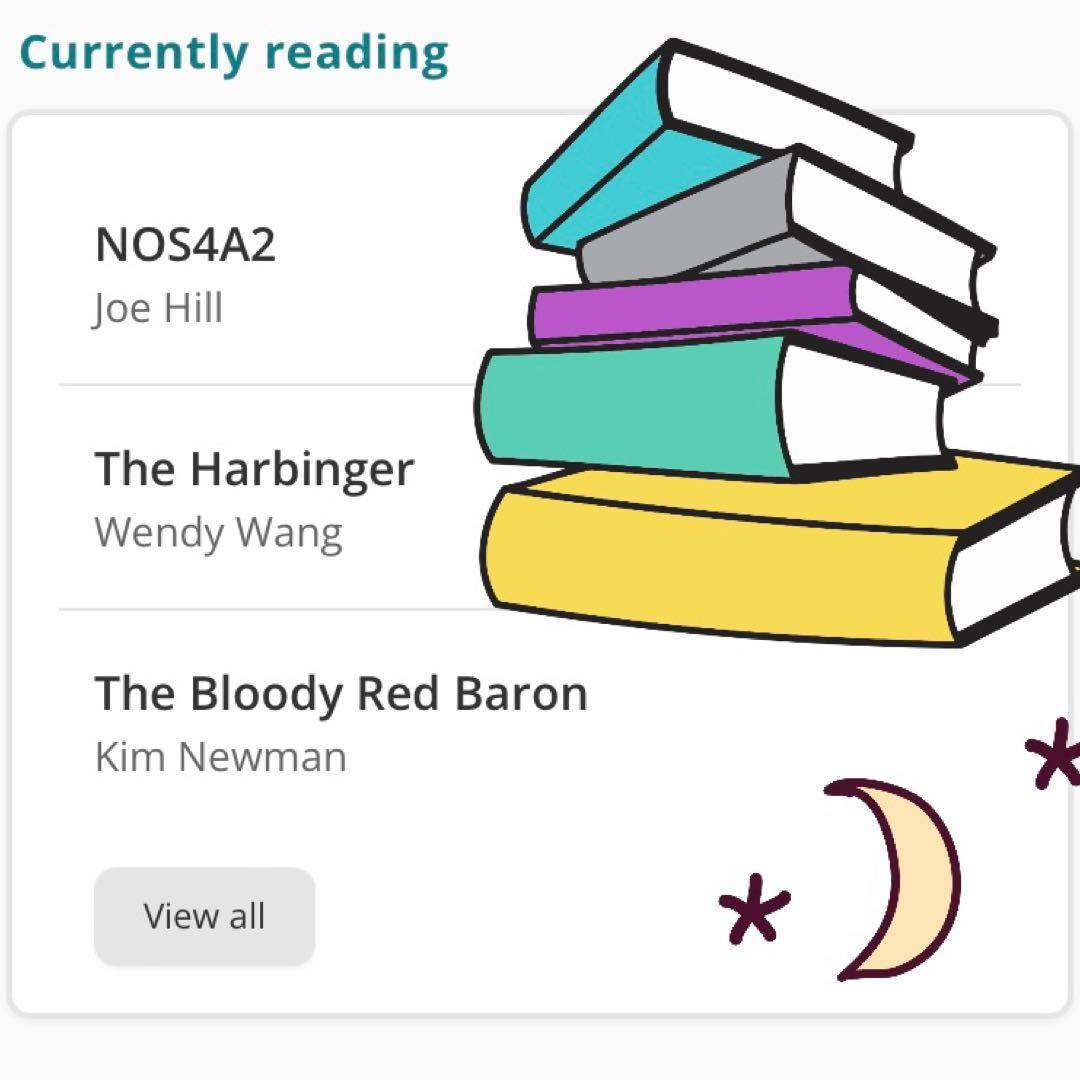 Can you tell it‘s spooky season? Got an audio, kindle, and paperback horror books going at all at once 😂 #Scarathlon2022 #TeamMonsterMash

I absolutely love this series. It‘s a lovely, rainy day. So time to curl up and re-read this one.

#BookMail Pt9 The 2nd book in the Anno Dracula series is set 30yrs after the first, it‘s 1918 & Graf Von Dracula is commander of the German forces. The war is also a battle between the living & the undead. Charles Beauregard & vampire reporter Kate Reed are caught up in the conflict & go head to head with the vampire known as the Bloody Red Baron. Definitely looking forward to this!🧛🏻‍♀️🧛🏻‍♂️

JazzFeathers Wow! I wasn't aware that this was a series (only the first book was translated into Italian a long time ago). Seen my current obsession with WWI l'm much more intrigued by this novel than the first in the series. And honestly, how could l ever resist that cover? 😍 Would it be possible to read just this book, or the first is recommanded? 4y
Lizpixie @JazzFeathers I suppose you could start with this one, but a lot of the history between Beauregard, Reed & Dracula are in the 1st book so you‘d probably miss a lot of the references & reasons for things that happen. Honestly, I‘d recommend reading the 1st book. And there‘s at least three more after this one! 4y
JazzFeathers @Lizpixie l'm going to give this series a go, then. Thanks 😉 4y
Lizpixie @JazzFeathers no problem! Recommending books is my reason for living🤗Enjoy♥️ 4y
38 likes3 stack adds4 comments

Starting this one. The writing is just as amazing as the first.

I can't say enough how much I love this author. He's my #vampire novelist. It's gruesome, scary and bloody entertaining. Plus, the covers. I loved everything about this book and it'll sit beside my other favourite vampire novel, Anno Dracula.

With Anno Dracula, part of the fun was noticing the fictional and historical individuals that Kim Newman included. With Bloody Red Baron, it was a bit more difficult as I'm not familiar with WW1. This time, he even included a chapter-by-chapter appendix. That being said, a few I caught including this homage to #Batman! LOVE Kim Newman!

These are the secrets of life that I want to know! Especially the murderer of Edwin Drood!!

Kim Newman writes a gruesome tale, but it is also oh so fun to become immersed in his reimagined world. And not just because of the vampires! 😉🎃👻

While the turkey is cooking, I decided to decorate for #Halloween. The dog didn't move fast enough. #LilDemon

BookishMarginalia Lol! 6y
Bibliogirl Ah! I remember reading this while I was at uni. Must look it up again. 6y
StellaDz I just love how he reimagines things! 6y
13 likes1 stack add3 comments

I love Kim Newman and I'm excited to finally start the second in his Anno Dracula series! As the spine says: 'How could World War I be made even grislier? Add Vampires.'

Plus, these covers?? Absolute gorgeous.