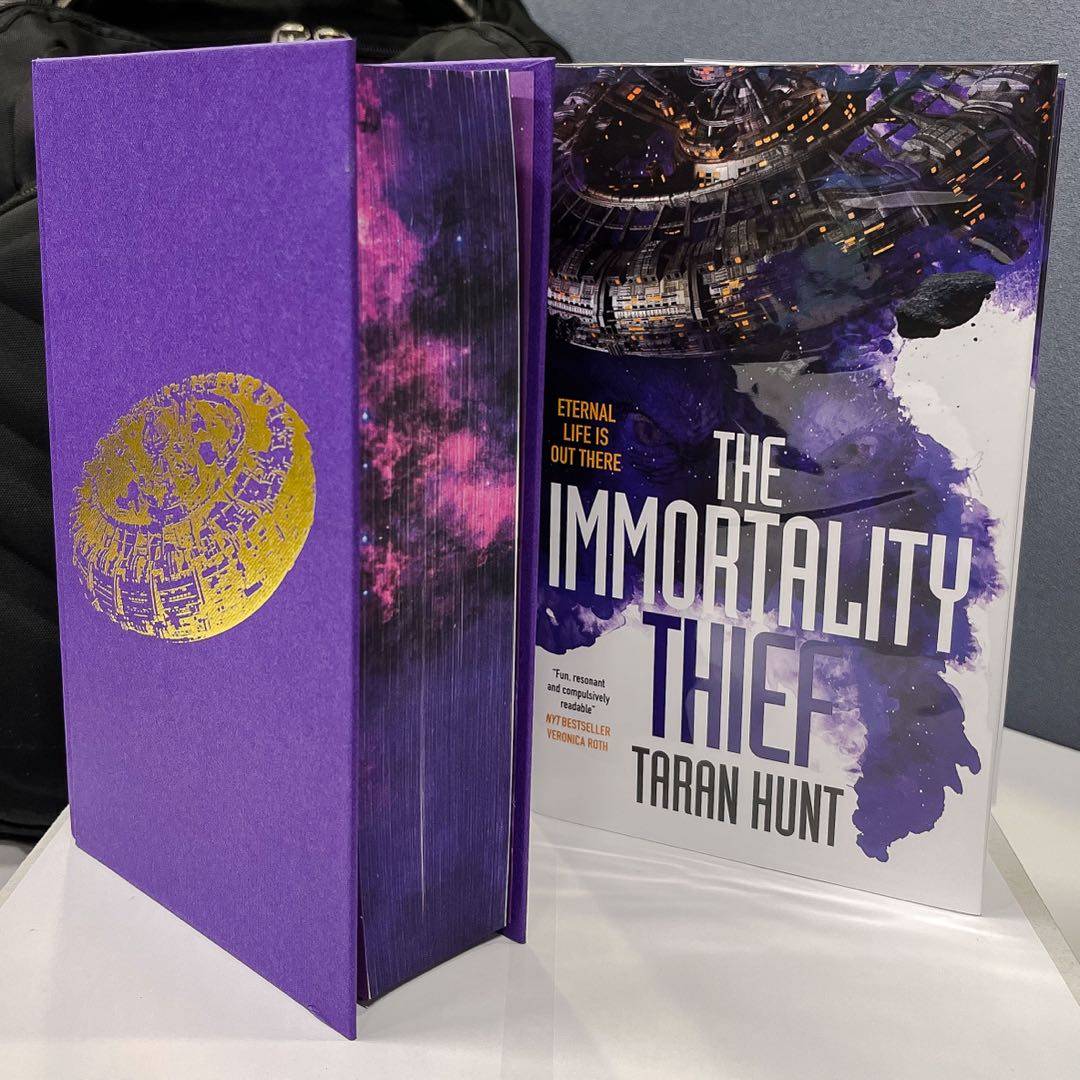 I‘m looking forward to reading this book! I need some sci-fi!

GondorGirl I can't wait for my copy to show up... This looks so good (and pretty)! 🥰 2d
Twainy @GondorGirl I thought it was going to be block sprayed purple edges … it‘s navy, purple, pink, white …. Like a picture of a galaxy maybe? It‘s nicer & bigger than expected. I‘m in the mood for sci-fi! 2d
23 likes2 comments 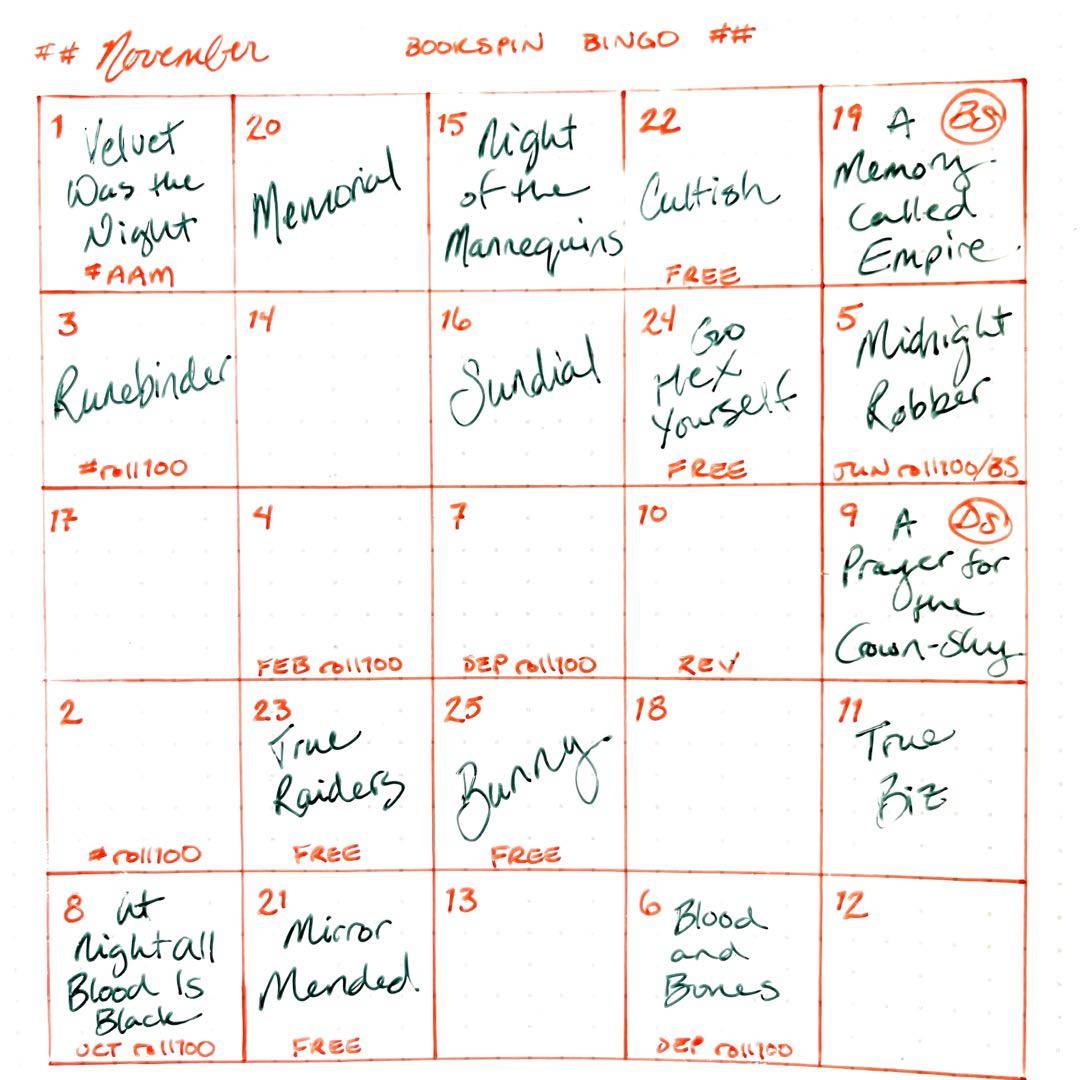 I know I‘m late to the party, but I still really liked this Jadzia Dax / Aztecs / Byzantine Empire mashup. Excited to read book 2!

Plus, I finished my #bookspin and #doublespin for November, read one book for #aam, did some damage to my backlog from challenges, and got a bingo. Surprising for a month where I said I‘d be doing more “relaxed” reading!

Started the day with a Goodreads win 💪🏽

Took me a while to get into this, mainly because I was distracted by the World Cup and didn‘t pay attention to the second chapter but now I can‘t put it down. Epic space battles! - but I wish I had a bit more sense of the distances between planets.
20 years ago the Dol‘jhar were foiled in an attack on the Thousand Suns, the systems ruled by the Panarchy and now Eusabian, Avatar of Dol and Lord of the Kingdom of Vengeance, is mounting his revenge

humouress We get lots of viewpoints, including from incidental characters, but the main POV is Brandon's - the Panarch's 3rd son (and those around him). 10 years ago his eldest brother engineered his disgrace and dismissal from the Naval Academy and has controlled his life since. Now, on the eve of the ceremony as one of the Panarch's heirs, he decides to walk away. But this coincides with Eusabian's attack. 7d
humouress There is some 3 Stooges-type slapstick but it‘s easy enough to ignore it 5d
3 likes2 comments

There is a thousand year old space ship about to be sucked into a supernova. MC Sean, among others, has to retrieve important data about the Philosopher's Stone from the ship. The quick job turns into alien encounters, sociopolitical debates and a rather predictable outcome.

I liked the short chapters and the chapter titles. I did not enjoy the 600+ pages of the book. The story could have been told in half the page-count.

Imagine a #sf #cyberpunk #spaceopera told from the perspectives of an evil admiral of a mercenary fleet and her faithful lieutenant/wife. It‘s a rare unicorn: a dark #powercouple in a long-established #lgbtq relationship. Sex, death, echos of betrayal, and whimsical AIs of uncertain allegiances abound.

Previous volumes were each more of a standalone story; this one capitalizes on them.

This one was very enjoyable, though I felt a bit lost at times as I'd not read the series that precedes this one. It would have helped if I'd realized ahead of time that there was a glossary of characters/names at the end of the book! 😄

In the Company of Others
1mo
Catsandbooks 🙌🏼👻🧡 1mo
kwmg40 @TheSpineView @DieAReader @TheAromaofBooks @Catsandbooks Thanks for stopping by! 1mo
kwmg40 @rwmg I hope you enjoy Czerneda's books. I've read several of her novels, both science fiction and fantasy and have enjoyed all of them. 1mo
DieAReader 🎉🎉🎉 1mo
30 likes9 comments

I have a complicated relationship with this author. I‘m not fond of her style, but she‘s good at worldbuilding, and I‘m a sucker for that, especially when it‘s not based on overdone Western mythologies. Still, this is the first of her works I truly liked—maybe because it‘s not a romance.

And either I‘ve gotten used to it, or the writing is better in this one.

I loved the trilogy this book follows, though I can understand why someone would not—it's written in a style that could be considered flat. I like it though—this underhanded, unostentatious treatment of emotions. The style is the same here, and, even if the plot is less intricate, it's still a win in my book.

This is the first book in the series and I will definitely be reading the next book. A space opera set in the far future when humanity had spread throughout the galaxy. Evil rules and the government is corrupt. Great world building and the author spent a lot of time developing the characters so that you really understand them. Adventure, intrigue and wonderful characters make this a must read in the genre. 4 ⭐️ #Scarathlon2022 #TeamMonsterMash